Mark and I recently spent a few hours photographing local band Pop Rocks. These guys are a hoot to be around and the energy was off the charts. I only had two shots planned while Mark had several which you can read about on his sight below.

In one of my shots I wanted to include a projection of the band’s logo. Unfortunately I had a couple of things going against me, time and light. It still wasn’t quite dark enough outside where I was shooting and one of the band members had to leave. Trying to balance any kind of flash with a projector is tricky but add ambient light to the mix and it makes it that much harder. Luckily I was able to use 2 of Mark’s Flashpoint eVOLV 200 kits he recently got from Adorama. In addition to having grids and barn doors, the units allowed me to drop my speed to 1/25th of a second and bump my f-stop to 4.5 while using their lowest setting of 1/128. A bit more time to tweak the balance would have been great but given the 5 minutes I had I am happy with the result.

Xplor/Godox – How it has changed my workflow 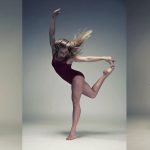